Now Southwest
Previously known as “Southern California/Southern Nevada/Southwest Utah and Hawaii,” for 2019, this Caravan Section rebranded itself as just “Southwest”

“Cap’n Tony” has plenty of experience. He was a Caravan Commander for the 2009 and 2014 trips and the Section Executive Officer for the 2014 Caravan. Tony works for the Federal Aviation Administration as an air traffic control instructor, so he’s real good at directing people to go to the right destinations-a highly-desirable quality in a Caravan Captain.

Tony and Wife, Paula, are Members of the Corvette Club Santa Barbara and live in Ventura, California. They own the Lead Car for the Southwest Section, a 2016 Long Beach Red, Z51 Coupe. He formerly owned a 50th Anniversary Edition. Fun fact: Tony’s first ever drive trip outside the State of California came in that 50th Coupe on the 2009 Caravan. 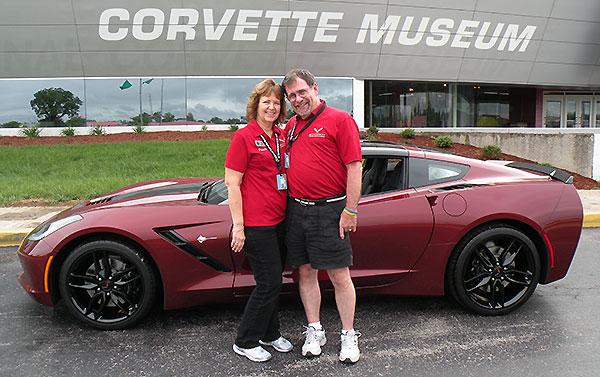 Section Captain, Tony, and CFO, Paula, with their C7 at the museum. Image SW Section eNews

Experienced Team
Paula Megowan, was reappointed as the Southwest Caravan Organizing Team’s Chief Financial Officer. Paula was CFO for the 2014 and 2009 Caravans. Mrs. Megowan, an accountant by trade, will manage all fiscal affairs of the Section. Ten years of experience in Caravan money management, will be a significant help to the Team. Paula will also set-up and run the Caravan Section’s registration operation during Departure activities. Paula is a “Caravan Commander” and has a seat on the Southwest Caravan Organizing Team (SCOT).

Capt. Megowan appointed Doug Rosa to the SCOT. Commander Rosa, who is also the President of Color Country Corvettes in Southwestern Utah, will organize the Section’s Utah activities. Doug’s day job is in the travel business so he will be the point man for blocking hotel rooms.

Megowan has, also, named, Doug Glenore to the Organizing Team. Commander Glenore, a member of Corvettes of Temecula Valley, will set-up and lead the San Diego/Riverside County Feeder Caravan which will leave Paradise Chevrolet in Temecula on Tuessday morning 20 August. Doug will lead SW Section fund raising activities in the San Diego/Riverside area.

Richard Long, a member of the Corvette Club of Hawaii has been appointed a “Caravan Lieutenant” and Local Leader. Lt. Long will lead the Hawaiian contingent from the L.A. Harbor area to the Westin in Pasadena on the night before the main Caravan leaves California.

The Team is looking for more Caravan Local Leaders to organize feeder Caravans in the Ventura/Santa Barbara/San Luis Obispo and Orange County areas of California as well as in the greater Las Vegas area. Local Leaders must reside in the area for which they are responsible. Anyone wanting to serve on the Organizing Team or as a Local Leader should call Capt. Tony Megowan at 805-659-5056 or email him at tmegowan@interlogics.net.

Finally, Tony Megowan, convinced past Section Captain, Hib Halverson, to come out of retirement and return to the Organizing Team as its XO. He will assist with sponsor acquisition, fund raising, public relations and PreRun trips.

Thinking outside the box, Captain Megowan has changed almost the entire route and lengthened the event by a day such that the Southwest Section’s trip to B.G. in 2019 will take a full week, from 22 August to 28 August.

Caravan Departure night is the evening of 21 August at the Westin hotel in Pasadena. The Caravan will begin the next morning, 22 August 2019, at the Elks Lodge in west Pasadena and head north, over the San Gabriel Mountains on storied Angeles Crest and Angeles Forest Highways. In the high desert, the Caravan will take State Routes 14 and 58 to Barstow and then I-15, Nevada SR164 and US95 to Henderson for the first overnight at the Fiesta Henderson Hotel and Casino

Day Two will have the Caravan leaving Henderson going northeast, then north around the west shore of Lake Mead, followed by a scenic drive though Valley of Fire State Park. Finally, the Section will head north on I-15 to St. George, Utah.

On 24 August, Capt. Megowan will lead the SW Section to Grand Junction, Colorado via I-15 and I-70. On Days Four and Five, we take I-70, over Vail Pass and though the Johnson Tunnel, the highest section of the Interstate Highway system, and then to Colby, Kansas on Day Four, followed by Kansas City, Missouri on Day Five. In “KC” the Southwest Section will link with Captain Don Herzer’s Pacific Central Section. That night both Caravan sections will have dinner at the Airline History Museum then get a presentation on historic Lockheed Constellations by Cap Tony. 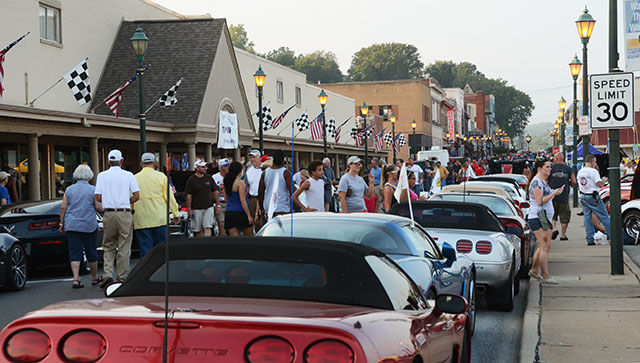 For final overnight of the trip on 27 August, the Southwest Section will stop in Cape Girardeau, Missouri. The Caravan was in “Cape G” for the 2014 trip and, five years ago, it was the best evening event of the entire trip. In 2019, Four Caravan Sections, Southwest, Pacific Central, Captain Ike Dodrill’s Oklahoma/Texas Panhandle and Tommy Mallory’s Kansas/Missouri will join together in “Cape G” for a car show and monstrous meet-and-greet organized by the Cape Girardeau Visitor’s Bureau and the Southeast Missouri Corvette Club. There will be beer gardens, live bands and Caravan cars on display. The event will be open to the public and a large contingent of local Corvette club members as well of a large crowd of non-Corvette locals will be drawn to the event. All the restaurants in the downtown area will be open for Caravaners to sample the wide variety of cuisine available in Capt G.

The last day of the trip, 28 August 2019, is the run from Cape G to the National Corvette Museum in Bowiing Green, will be the only part of the 2019 Southwest Caravan which covers any old ground. For that we will use the route originally scouted by retired Oklahoma/TexasPanhandle Section Captain, Alton “Tuna” Dobbins, for the 2014 Caravan, Hillvue Heights Baptist Church in Bowling Green.

Eight Prerun Trips
Because the Southwest Section’s route is all new on six of the seven days of the trip, the Southwest Caravan Organizing Team made eight perun trips over part or all of the route. The early trips in 2017 and mid 2018 were mostly to recon the route. Later in 2018, preruns were to locate and/or inspect hotel properties, facilities which could be used for Caravan staging or reforms during the day. In Spring 2019 PreRun Six covered almost the entire route and was used for gathering information for the Section’s Route Book and to time each day’s drive. Over the Summer. the SW Organizing Team did two more prerun tips to investigate road construction which, in one case, required a change in caravan routing.

PreRun 1. Just off I-15, July 2017. About 60-miles southwest of Las Vegas, Section Capt. Megowan views Nipton Rd though binoculars. At left, far in the distance, is the BNSF right-of-way along with the Nevada State Line at which Nipton Rd. becomes Nevada State Route 164. Just over the mountains at left is Searchlight, Nevada. Image: eNews Staff 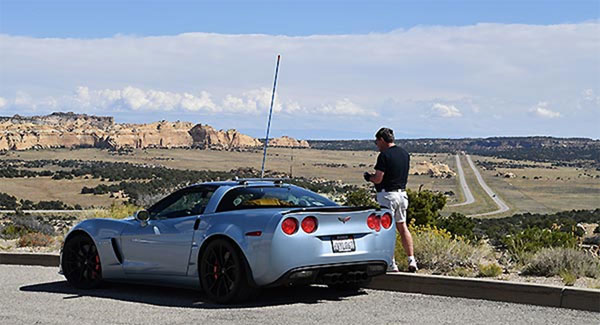 PreRun2 on 23 September 2017, at the Ghost Rock Viewing Area off eastbound I-70, 85-miles east of Salina, Utah, Section Captain Megowan checks his recon notes on what is the first new Caravan route for the Southwest Section since 1994. In the distance, above the Blue Bullet is “Locomotive Point,” a noted landmark in the area. Image: eNews staff

PPreRun4 at 11,158-feet alongside westbound I-70, 77 miles west of Denver, on 5 November 2018. In the background is the west portal of the Eisenhower/Johnson Tunnel, the highest highway tunnel in the United States. PreRun4 was lucky to sneak across I-70 in the Rockies in light snow which didn’t stick. What part of “At 11,000-ft.-it’s really-cold-in-early-November” did Captain Megowan not understand? Image: eNews Staff

Meeting New Friends
One reason some people give for wanting to go on the National Corvette Caravan is to meet Corvetters from different parts of the country. According to Capt. Tony Megowan, the 2019 Caravan is shaping up as a great way to do that. “I’ve already had inquires from Northern California,” Megowan says, “about the possibility of our Section and their Sections combining on the sixth and last days of the trip. If that happens, it will be a lot of fun for everyone. We have a group of people from Hawaii who are shipping Corvettes to L.A. Harbor and will join us on the Caravan. In Cape Girardeau, you’ll meet even more new friends from the Oklahoma/Texas Panhandle and Kansas/Missouri Sections.” 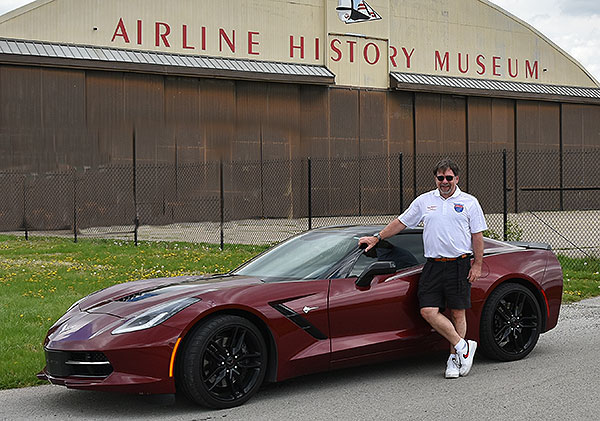 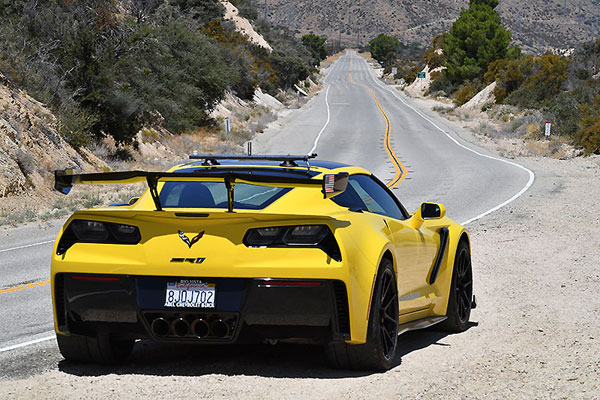 Thankfully, SW Section XO, Commander Hib Halverson, found no road construction on PreRun8, only this wide open four-lane stretch of Angeles Forest Highway which ought to be a huge temptation for Caravaners come the first day of the trip. Image; SW Section eNews Staff.

Sponsorship and Advertising Opportunities Available.
Organizing and staging a seven-day Caravan of several hundred Corvettes costs a fair amount of money. The National Corvette Museum which sanctions the National Corvette Caravan provides no funding for Caravan Sections. It is up to every Captain to raise money to cover his/her Section’s expenses.

If you own a business which sells products of interest to Corvette owners and your business is located in the Southwest Section’s area, the Caravan Organizing Team can help you market your product to our Caravaners. We have an electronic newsletter co-sponsorship available which will put your company name in front of all our about 500 Caravaners on a regular basis for the next year. Also, we have Route Book advertising opportunities available. The Route Book contains information Caravaners need during the event and is read continuously by all Caravaners for six days. Finally, we have event sponsorships available. Event sponsorships include naming rights for an evening Caravan event along with promotional opportunities before and during an evening event.

Those wanting to discuss sponsorships should contact Captain Tony Megowan at 805-659-5056 or email him at tmegowan@interlogics.net.

The Southwest Section has an electronic news letter which keeps SW Section Caravaners up to date on news of the Caravan. To get our eNews, send an email requesting subscription to: scsneNews@netmotive.net